Are Barndominiums Cheaper Than Stick Built? 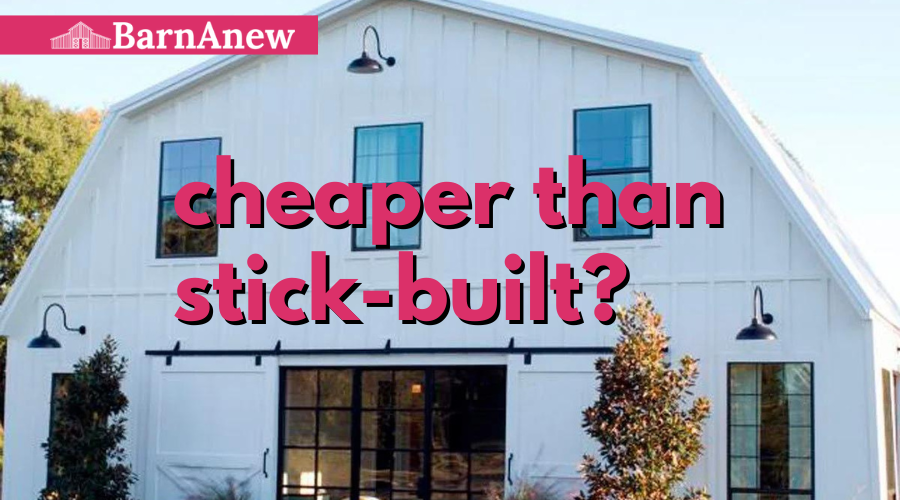 Average Cost of a Barndominium vs. Stick-Built House

Barndominiums are often cheaper than stick-built homes. While some factors can influence just how much money you save, it’s usually an economical choice to build a barndominium instead of a stick-built structure.

Depending on the size and style of the home you want, you can save a lot of money when you build a barndominium rather than a stick-built home. In Minnesota, for example, experts estimate that you can save as much as $40,000 by creating a “post frame” structure like a barndominium.

One of the reasons that barndominiums have become so popular is it’s a great way to save money, especially if you want a larger home. Other benefits have made them one of the hottest trends in home building, including the fact that they are eco-friendly because they reduce waste by repurposing existing barns rather than demolishing and throwing them in the trash.

Most barndominiums are cheaper both as a renovation project and as a new build. The frame is often in place if you do a repurposing project, and even when you have to build the barndominium from the ground up, it is usually constructed from a pole barn set, which saves a lot of work.

Pole barns are cheaper than stick-built barns because:

I’ve also written a guide to breaking down the costs of building a 40×60 barndo as an example. Reading it will give you a better idea of how much you’ll need to spend on building a barndominium.

Ways Brandominiums Can Be Cheaper To Maintain than Stick-Built Houses

Renovations Are Easier To Do and Can Save You Money

Because there is often an open floor plan and a lot of space, renovations can be much easier in a barndominium than in a stick-built home. There is less of a chance you’ll have to knock down any walls for renovations you want to make, and this can save you a lot of time and money when you want to do particular renovations.

Some ideas you may have that could be cheaper to add on to your barndominium include:

Another way you can save a lot of money over time with a barndominium is with maintenance. There just isn’t much you’ll have to repair when you have a barndominium. Fewer repairs are required because most barndominiums are made from steel or another metal, which is far more durable over time than wood structures.

Some of the headaches that you save on by having a barndominium, especially if you construct from metal, include:

When Are Barndominiums More Expensive Than Stick Built?

The materials you use to build your barn matter. If you are using steel or metal studs inside to support the barndominium, it will cost more. Using wood for your studs will save you money when reinforcing your barndominium.

Watch this video from Texas Best Construction that explains how to save money on your barndominium while reinforcing the interior of the building:

Barndominiums Can Be More Expensive To Maintain Than Stick Built

Because you are dealing with much larger square footage, you need to consider some factors when considering whether barndominiums are cheaper than stick built. They are almost always cheaper to turn into a home than constructing a stick-built structure from scratch. However, there are some ways barndominiums may cost you more in the long run.

Ways That Barndominiums Can Be Much More Expensive

Some Places Require You To Have a Permit for Barndominiums

You can’t decide to build any structure you want anywhere. Many cities have zoning codes and don’t allow certain types of buildings. One of these may be steel structures, which many barndominiums are.

If you live in an area that doesn’t allow specific structures to be used as homes or built at all, you may need a permit to build it or tear it down entirely if you find out later that it’s not allowed. Building in areas with strict rules can cost you a lot of money if you get into legal battles or start to build one in a place they’re not allowed and be forced to take it down.

One example, in the city of Arnold, Missouri, was where the city voted to block the building of barndominiums, at least temporarily. Because they are a relatively new dwelling style and some cities and states aren’t comfortable with them, you could face some unexpected opposition.

Before you build a barndominium from scratch or replace an existing one, you’ll want to ensure it’s allowed where you live. Having to pay hefty fines, tear down the structure, or stay in a hotel while you’re waiting for permits could cost you a lot of unexpected money that you may not run into building a more traditional stick-built home.

Repairs May Set You Back With Barndominiums

Because you are working with a structure that has already been built and has often been standing for an extended period, you may need to spend money on repairs. The repairs could set you back if major issues that you weren’t expecting need to be addressed.

Some repairs that you may not have expected to make that could end up costing you a fair amount of money include:

There’s no surprise why barndominiums are such a popular method of building. They often take existing structures or ready-made pole barn kits and turn them into a large living space. Barndominiums can also save you a lot of money, especially over time.

More and more people may move towards this exciting style of homebuilding because of all the costs you can cut. If you want a large home while saving money, barndominiums may be an excellent choice.

BarnAnew is reader-supported. When you buy through links on our site, we may earn an affiliate commission.

As an Amazon Associate, I earn a commission from qualifying purchases.