Are Barndominiums Hard To Sell? What You Need To Know 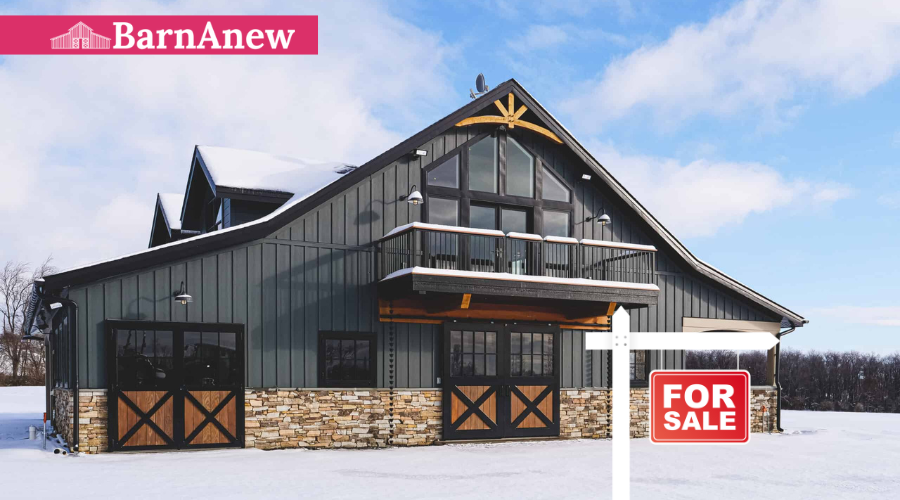 In the last couple of decades, Barndominiums have become quite a popular trend and a refreshing alternative to traditional homes. If you’re thinking about building one to live in or as an investment, you’re probably also wondering if it is difficult to sell.

Barndominiums can be hard to sell compared to traditional housing, mainly because their demand is still relatively low. Additionally, the fact that barndominiums are very personalized and, at the same time, cheap can convince people to build one rather than buy an existing one.

Let me elaborate more on the reasons above and several other aspects of this subject in the rest of this article. I will explain what barndominiums are, why they are becoming so popular, and all the factors that affect their commercial viability.

Why Barndominiums Can Be Hard To Sell

You may have heard contradicting information on whether barndominiums are a good investment or not. This general confusion exists because these particular properties are relatively new as a concept and have become very popular only recently. However, as it stands, certain obstacles can make your barndominium harder to sell than a typical house.

Let’s explore these obstacles in detail below:

First of all, barndominiums are still rare in a lot of areas. Certain urban areas don’t even allow this type of property to be built because of building codes. While trendy, it’s still unusual as a concept among potential buyers, especially for a primary residence. As a result, your chances of selling your barndominium are automatically lower than they would be if you were selling a regular house.

Personalized Spaces Can Be a Problem

Additionally, the open style of barndominiums requires them to be highly personalized to their owner’s taste, which can be exciting for the original owner, but not so much for a buyer. The more customized the space is, the harder it may be to find buyers who would want to live in it. And barndominiums with complex designs or unusual materials can be especially hard to sell.

Some Prefer To Build Their Own

Finally, barndominiums are not very expensive to build, considering the structure and the simple floor plan. Therefore, a buyer with the time and money may choose to build a barndominium instead of buying one. Considering the disadvantage of an already personalized space I just mentioned, this is an attractive option to many people. You can read more below on the building and maintenance costs of barndominiums.

However, as people are starting to turn to rural areas and open living spaces, barndominiums are becoming more and more popular and widespread, which can be promising for you as a seller. Low building costs, durability, and lack of depreciation can make your barndominium a sound investment.

The Concept of Barndominiums

The term barndominium is relatively recent, having been coined by Karl Nilsen in 1989. The word itself is a combination of barn and condominium, essentially describing a house that includes a barn for horses that has been renovated to create an open and readily customizable living space.

The definition has changed a bit with time, given the increasing popularity of barndominiums. Today, a barndominium describes any barn-style residence, usually with an open floor plan and an exterior made of metal. It can be a barn that’s been converted or a completely new building.

Barndominiums are characterized by a cozy countryside-like look on the outside and open living space on the inside. The latter is a unique feature that enables you to design your living space the way you want. You can create separate areas and multiple floors to your liking or keep an open floor plan. Your barndominium can reflect your imagination and taste better than a typical home.

How Much Does It Cost To Build and Maintain a Barndominium?

Low building and maintenance costs are essential advantages if you own a barndominium. Building a modern home and personalizing it at a much lower price than a typical house increases your chances of profit in case you decide to sell your barndominium.

Similar to other kinds of properties, the price of building barndominiums varies. A general estimate would price them between $95 and $125 per square foot, which means barndominiums can be almost half as pricey as traditional houses, which can cost up to $200 per square foot to build. It’s important to emphasize that the prices vary a lot depending on locations, but rest assured that barndominiums will always be cheaper.

The main reason barndominiums are cheaper to build is that the exterior is made of metal instead of wood, which creates a sizable difference in cost. Additionally, the floor plans are yours to design, so you can choose to make them as complicated as you want, saving on material and labor costs. This way, you can stay within any budget you have set.

Furthermore, maintaining barndominiums is less costly than traditional houses because the material used to build them is much more resistant. The roofs and siding of a barndominium are usually made of metal, making them last much longer. You won’t need to make any exterior repairs for at least a couple of decades.

What Affects the Selling Price of a Barndominium?

Once you decide to sell your barndominium, you must put a price on it, and this is where the appraiser comes in. An appraiser can determine the price based on several aspects of the property:

Location is probably one of the first things potential buyers will check when looking for any property. The most crucial aspect that makes a difference regarding location is proximity to reputable educational institutions, stores, parks, restaurants, and other facilities. Employment statistics in the area can also be a decisive factor. Therefore, location can be a disadvantage for barndominiums, since most of them are located in remote areas.

Newer barndominiums (built in the last decade or so) are preferable to older ones, mainly because they require less to no repair work. More recent properties also include modern exteriors and contemporary interior plans, which are preferable. When it comes to quality, the metal exterior is advantageous because it will last longer and withstand natural phenomena more easily.

Having any extra features will probably increase the price of your barndominium. Additional spaces like garages and walk-in closets, or special features like using environmentally friendly materials can convince a buyer to pay more. However, spaces that are too personalized can also turn buyers off.

Moreover, most barndominiums have space for an attic, but owners may decide to turn that space into a living area instead of storage. I’ve discussed attics in barndominiums in a separate guide, where you can also learn about the requirements of a habitable attic.

When appraising any property, real estate appraisers look at similar properties nearby to have an accurate idea of what a particular type is usually worth. For barndominiums, it might be a bit harder to find similar houses in the area since they are relatively rare, especially in some regions. However, with the growing popularity, finding comparable properties is becoming easier.

What To Keep in Mind When Listing Your Barndominium

Once you deal with all the crucial factors, you may still need some guidance to list your barndominium. Selling any property can be overwhelming, so here are some tips that can help you make a successful sale:

At the moment, barndominiums can be harder to sell than a typical house because they are not suitable for all kinds of areas, and sometimes they can be too personalized. Additionally, they are not costly, so some might find it easier to build one themselves.

However, as people move towards rural areas and open concepts, barndominiums are becoming more popular. As the demand increases, it might be easier to sell them, keeping in mind all the factors that can help to make a better sale.

BarnAnew is reader-supported. When you buy through links on our site, we may earn an affiliate commission.

As an Amazon Associate, I earn a commission from qualifying purchases.